The Heyday of Kell Hall 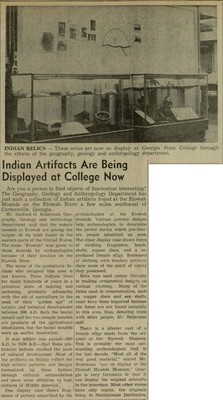 During the 1960s, the Atlanta Division of the University of Georgia continued to expand at a staggering rate through the downtown core of the city. The school grew from one building in 1945 to seven buildings in 1970. The Ivy Street Building continued to house many departments, particularly those with laboratories, and saw many renovations and upgrades during the 1960s.

The Geography, Geology, and Anthropology Department on the 3rd and 4th floors grew in 1960 with the construction of four new laboratories. The focuses of the labs were to be minerology, geomorphology, structural geology, and cartography.

The department also installed an exhibit of Native American artifacts from the Etowah Mounds near Cartersville, Georgia. Two glass cases held fragments of pottery and clothing, beads, shells, copper discs, and a reproduction of a female efigy.

In 1961, the school's name changed to Georgia State College when the Board of Regents dropped "of Business Administration" from the title.

In 1964, the Board of Regents approved the dedication of the Ivy Street Building to the memory of Wayne S. Kell, the original director of the school, and renamed the building the "Kell Science Hall." A Signal Newspaper article on January 30th of 1964 announced that a memorial plaque purchased by the senior class would be placed in the lobby of the building.

By the end of 1964, the main renovation project inside Kell Hall was the construction of new physics labs. The space used for this was formerly occupied by the Southern Bell company. New air conditioning was also a priority, but this was being handled by a specialized party because of the complexity of the job. At this point, general improvements were still being made to the building such as new lighting, painting, and floor resurfacing. 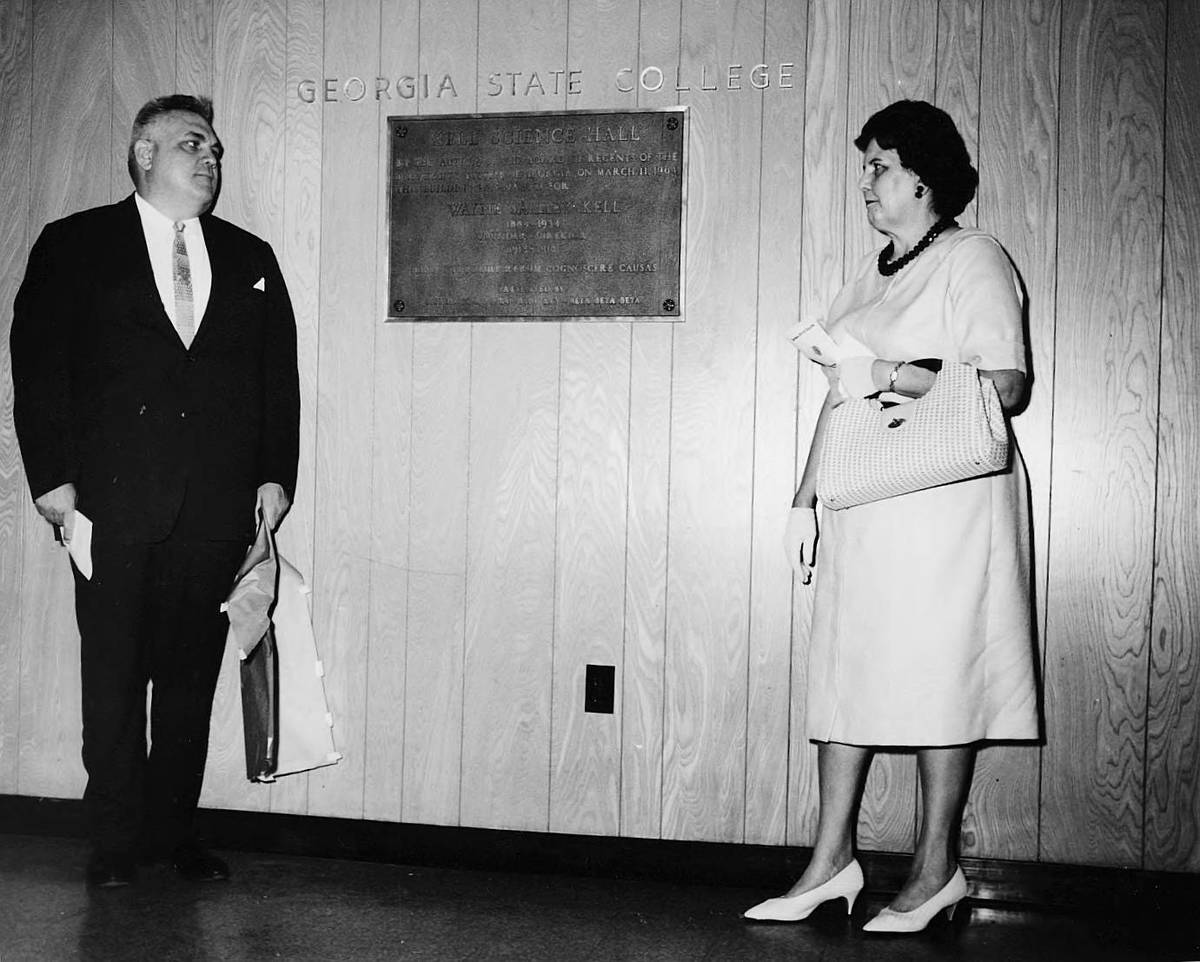 President Noah Langdale and Mrs. H. D. Rumble, daughter of Wayne S. Kell, at the dedication of Kell Hall in 1964.

By the mid-1960s, many plans were announced for new buildings. It seems the plans were just in time too because many of the students and faculty began to be agitated at the lack of space. The conditions were called “despicable” in a Signal article from September 9, 1965. A “business administration” building, costing $6 million, was planned at the corner of Decatur Street and Ivy Street (later Central Ave/Peachtree Center Ave). This building would later become Classroom South. The estimated build time to occupancy was one year.

Another new building for the Visual Arts was also approved by the Board of Regents, and the initial plans for this entire complex was to cost $13 million. The art department still occupied the 6th and 7th floor at this time, and the new building was planned to have four stories. A new library was also being erected for an estimated $1.7 million. The three-story building, later to be known as Library North, had a very simple design that was focused on lounge space and book storage. It was clear that Kell Hall had begun to reach its capacity and that the physical improvements to it could only do so much for the students and the college’s needs. 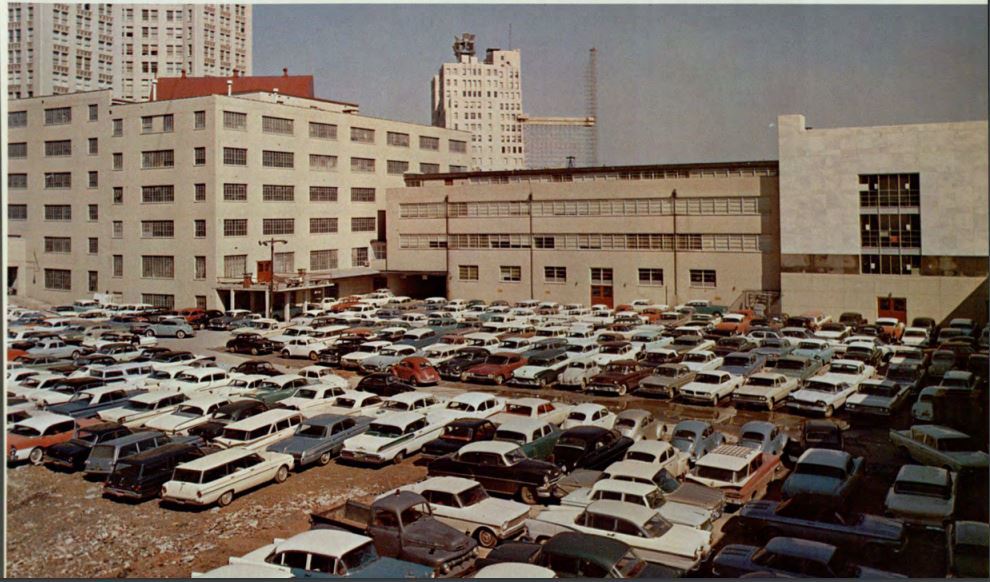 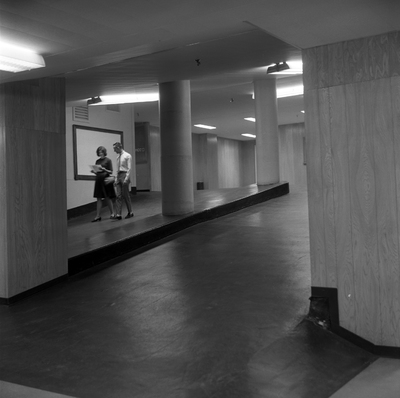 Renovations to Kell Hall meant it was very sleek and modern, despite the oddity of the ramps 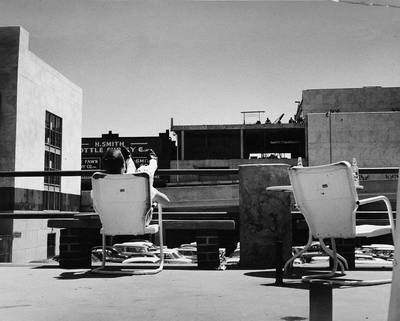 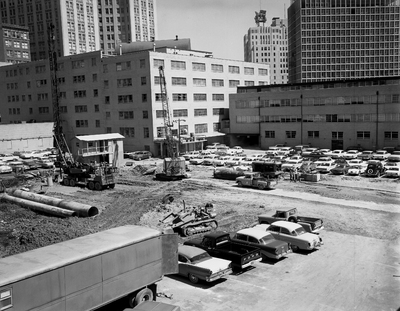 Construction on campus in the 1960s was always near Kell Hall 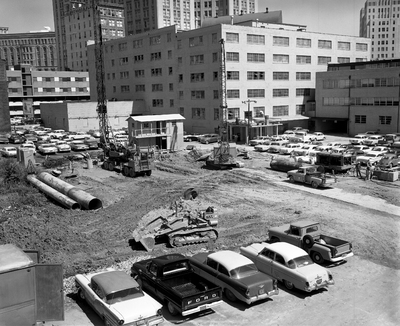 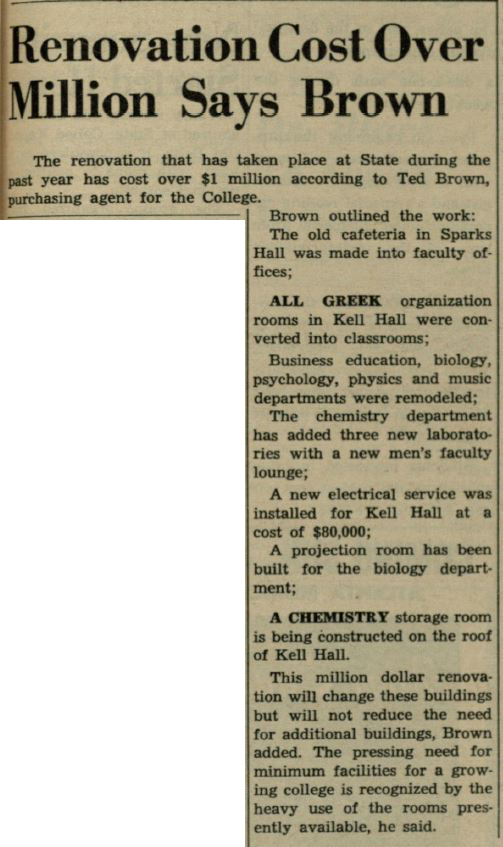 The continued shuffling of occupancy and purpose of Kell Hall was illustrated in a Signal article on February 2, 1966. During 1965, an estimated $1 million was spent on the ongoing Kell Hall renovations that included converting Greek societies rooms into classrooms, and constructing three new chemistry laboratories and a new men’s faculty lounge. It is emphasized in this article that “this million-dollar renovation will change this building but will not reduce the need for additional buildings”. Despite the clear shift of focus to new buildings, Kell Hall was still being improved in bits and pieces. In the spring of 1967, a new roof was being added to Kell Hall along with new aluminum frame windows.

In 1968, the Business Administration Building, now known as Classroom South, opened for classes. That same year, the floors being added to the top of the library building were nearly complete. All inspections of the build were completed and approved, and the only thing left was to transfer all the books and equipment which was to take a few months. The Fine Arts Building, later the Arts and Music Building, also was near the end of its construction with an estimated opening in mid-1970.

During the 1960s, the Ivy Street Building was given a fitting name, underwent even more renovations, and continued to serve as the cornerstone of campus. Despite the construction of many new buildings, Kell Hall stood firm in the midst of the changing landscape of Georgia State College.