Converting a Garage into a School 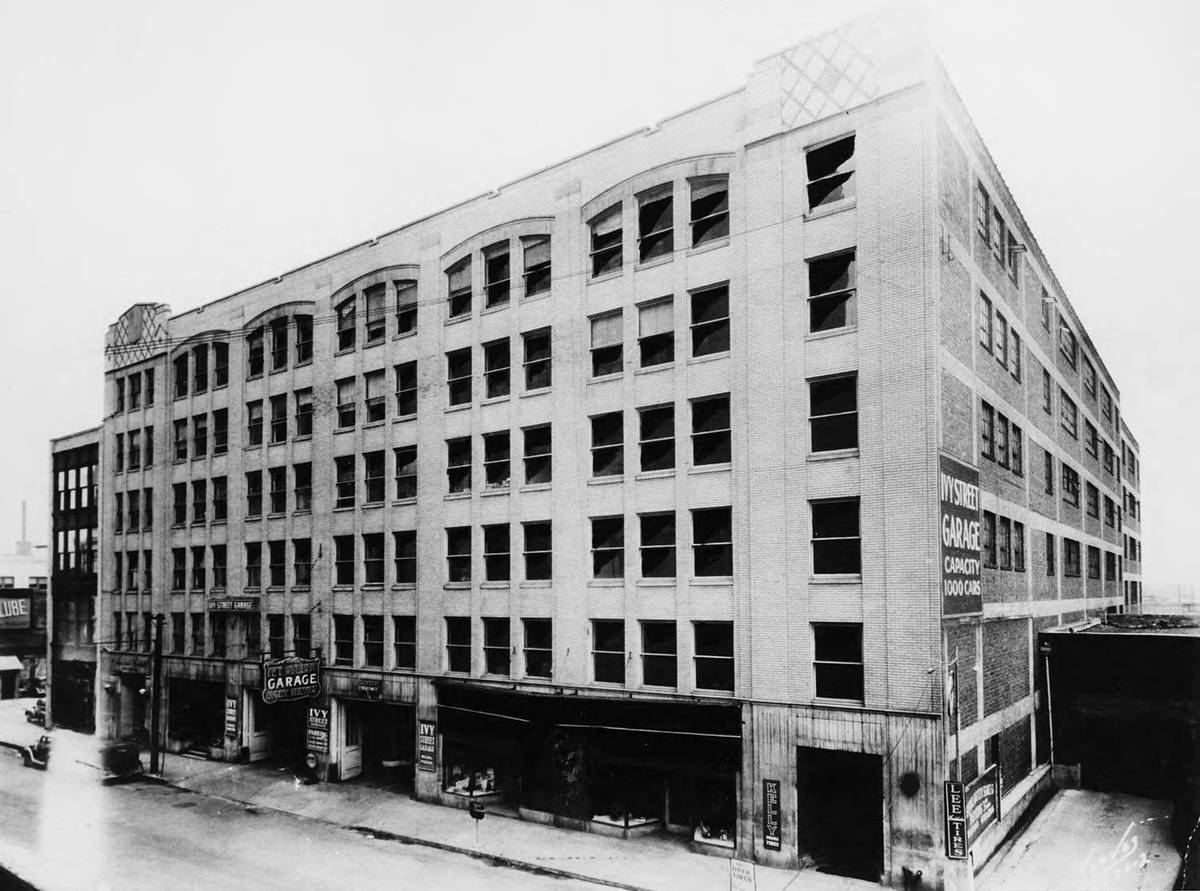 The Bolling Jones Building as it appeared when the USG took possession in 1945.

The history of the Bolling Jones Building as part of Georgia State University, and its many renovations started with a $100,000 facelift in October of 1945. This was a part of the “post-war reconversion” plan of the University System of Georgia. Dr. George M. Sparks, the director and president of Georgia State College of Business Administration, had included in these plans to convert the 25 offices of previous tenants into 35 classrooms. Six laboratories would be split evenly between the biology, physics and chemistry departments. The sections of the top floor would be torn apart and converted into a theatre for the drama department to use. The tar and gravel roof was to be converted into a garden area where social functions and dances could be held. 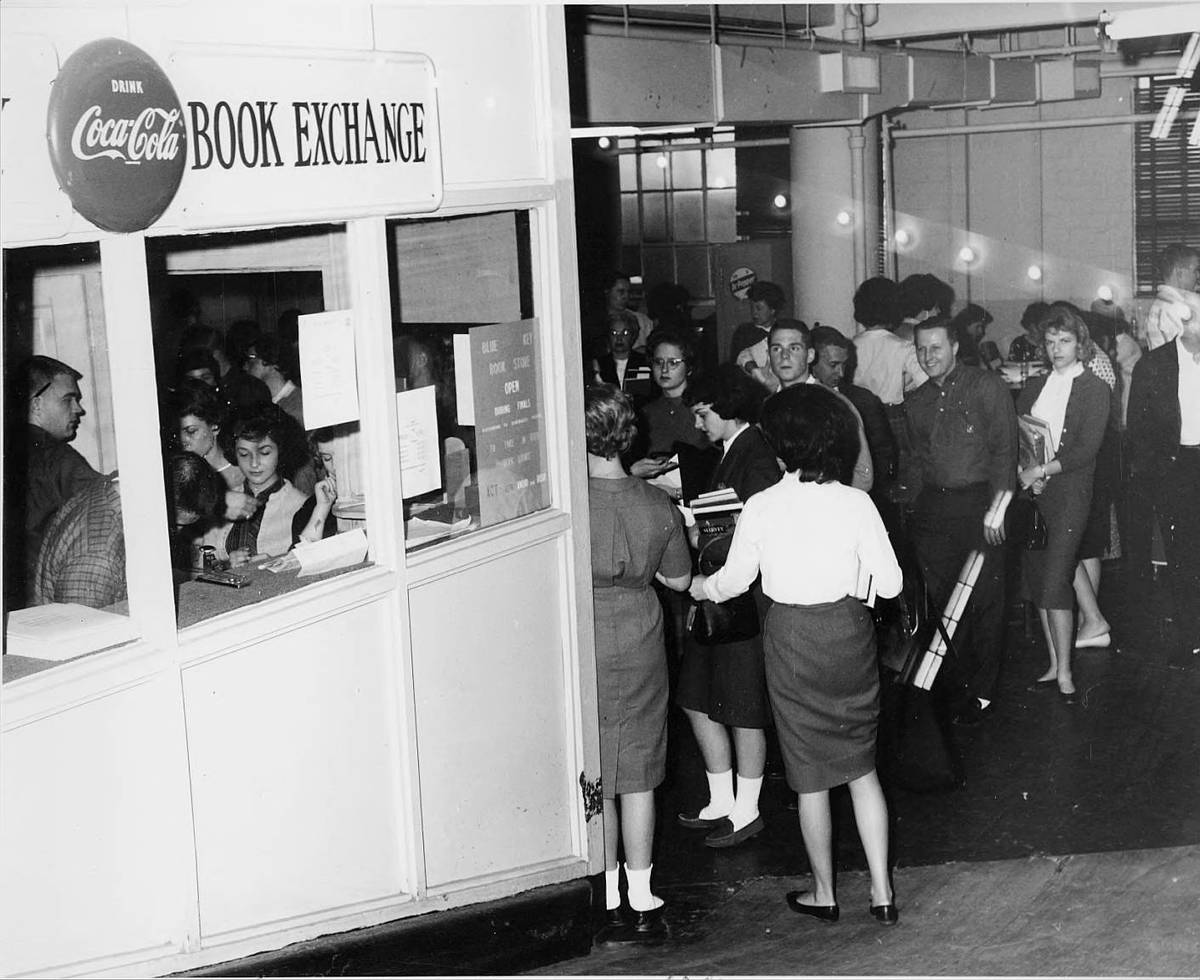 The Blue Key Book Exchange in the Refectory

The first floor contained offices, the Hurt Cafeteria, the Hurt Grill, the library, a barbershop, and a refectory where students could buy food, gather to study, or buy books from the Blue Key Book Exchange. The refectory remained a place for students to get snacks from 1945 until 2018.

A few aspects of the interior remained the same, and perhaps the most notable one would be the ramps. The ramps, of course, are relics of the building’s past as the illustrious Ivy Street Garage. Dr. Sparks thought the ramps would be helpful to the disabled war veterans who would attend the college and have classes in the building. 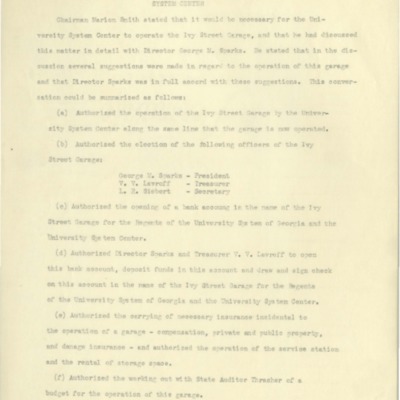 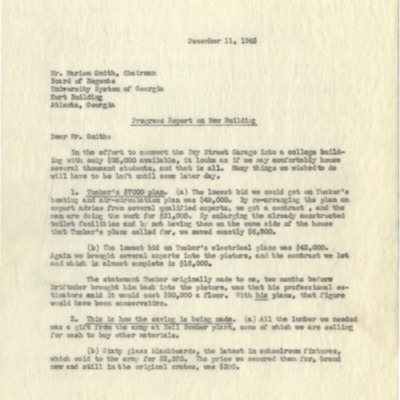 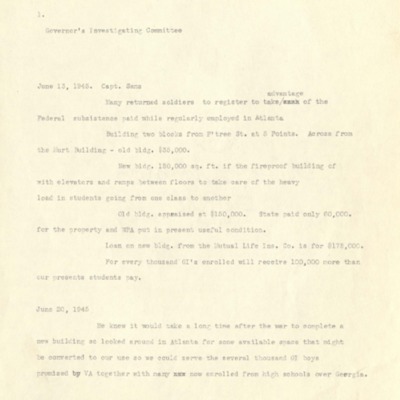 The Governor's Investigative Committee provides a detailed history of purchasing and refitting the Ivy Street Garage for use by the university, including monetary figures and construction specifications. 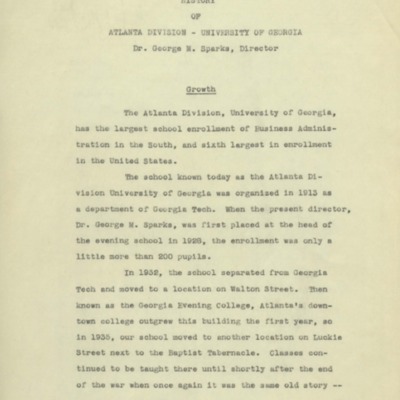 A brief history of the Atlanta Division prepared by George M. Sparks. It includes information about growth, operations, and facilities, with figures about student population, budget, and incomes.

In 1946, a temporary gymnasium was installed on the 6th floor to provide space for the mandatory physical education classes. In addition to the wooden floor for basketball, the gym held rowing machines, ping-pong tables, and exercise bicycles. By December of 1946, the school had also acquired materials for bowling alleys to be installed in the gym. Students were excited about the new addition to the school’s recreational facilities, but not everyone felt similarly. Mr. Strong, a consulting engineer for the Construction Division of USG, had an office directly beneath the bowling alley and expressed concern about the hours of operation and noise. The bowling alleys were open to the students by January 15th, 1947.

In time, the 6th floor began to be a topic of concern for the students and college. The bowling alleys, not even two years old, were in a bad condition and the recreational facilities were being moved out in favor of storage space and the art and music departments. Dr. Sparks made it clear though that classrooms were the priority and that the bowling alley might need to be moved completely. Later photographs show bowling lanes in the basement of the Indian Creek Lodge, so it's likely that they were removed from Kell and moved to the lodge. 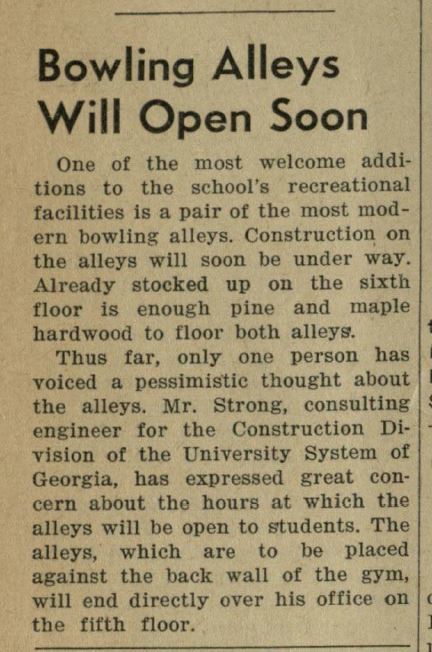 First announcement of the bowling alleys in the Signal, December 1946 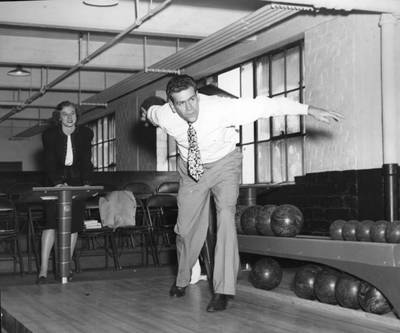 Students bowling on the lanes in the Ivy Street Building, 1940s 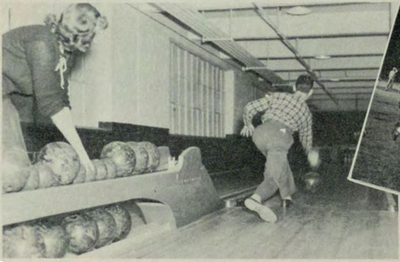 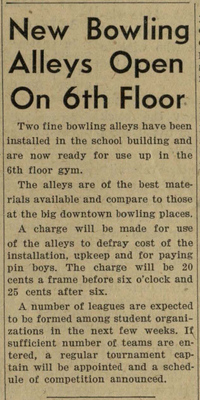 Announcement of bowling alleys open on the 6th floor, 1947 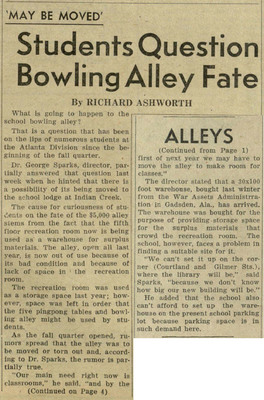 Signal article about the fate of the bowling alleys, October 1948

In the meantime, construction on the 5th and 6th floors was nearly complete for more classrooms that would hold an estimated 800 students. By February 2nd, 1949, an assembly hall with a capacity of 300 people was being built on the 6th floor that would facilitate concerts, recitals, and serve the Atlanta Symphony Orchestra as a rehearsal room. The 7th floor “penthouse” was also being renovated with new paint and flooring finish. The top floor was to serve as a multi-purpose facility for art exhibits, dances, and other assemblies.

With so many ambitious plans, some renovations were never completed. The plans for rooftop renovations were delayed when engineers could not find a waterproof material to replace the gravel and tar. The concerns were stemmed from the fact that the roof would be used for physical activities such as tennis, dances, and shuffleboard. The engineers also ceased plans by the college for a rooftop pool, stating that the foundations of the building could not withstand such a facility.

By the end of the 1940s, the Ivy Street Building had become a bustling center of activity for the growing school. In just 5 years, Director Sparks had turned a parking garage into an institute of higher learning. The renovations had allowed the school to grow, but heading into the 1950s, even higher enrolment numbers produced demand for more space.